I am so excited to be apart of this cover reveal!  I just love Stacey Kennedy and all the books she writes. 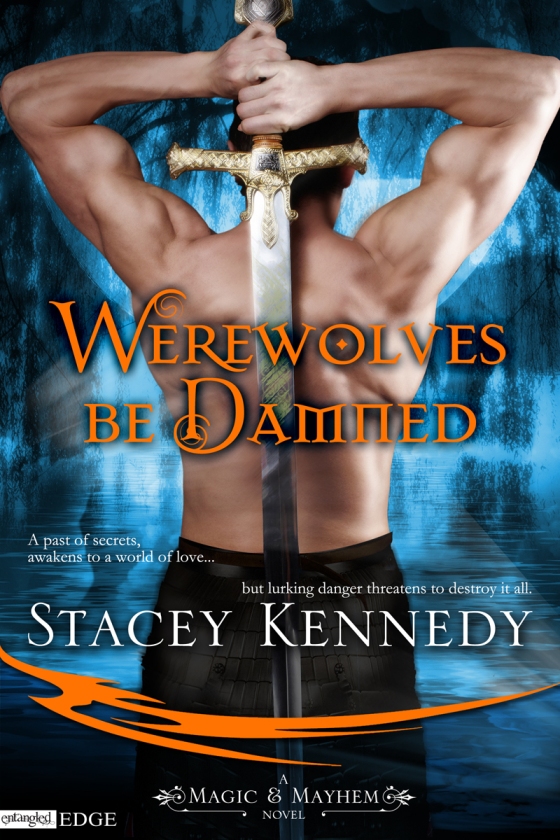 Nexi Jones—part witch, part guardian, and wannabe kick-ass warrior—can’t throw a punch or conjure the simplest magic. But that doesn’t stop her from hunting the werewolves who slaughtered her human family. She’ll have her revenge, but only if Kyden, the elite guardian, would get the hell out of her way.

Kyden can’t decide if Nexi wants to get herself killed or if she just has no clue what she’s doing. But her father made it clear: keep Nexi safe…or else. Of course, the more Nexi runs toward revenge, the more she needs Kyden’s aid, and as she grows into her power and confidence, so does his desire to protect her. The only problem? She’d rather he dropped dead.

But when a vampire paints a bull’s-eye on Nexi’s back, she’s hard-pressed to deny Kyden and the help he’s offering. Even if it means getting her revenge will be a little bit harder. At least it will still be as sweet.”

Stacey Kennedy is an urban fantasy lover at heart, but she also enjoys losing herself in dark and sensual worlds. She lives in southwestern Ontario with her husband, who gave her a happily-ever-after. Together, they have two small children who can always make her smile, and who will never be allowed to read Mommy’s books. If she’s not plugging away at a new story, you’ll find her camping, curling up with the latest flick, or obsessing over Sons of Anarchy and Game of Thrones.

Nexi peered from behind the large oak tree and spotted the small log cabin nestled in the thick forest. The porch light cast a warm glow into the night. Fog settled over the lush grass, and the night was dark, eerie.

Stepping away from her hiding place behind the tree, she strode forward and gripped the dagger tightly in her hand. Keeping the silver blade pointed outward, she climbed the cabin’s porch steps, taking each one slowly to avoid detection.

Once she arrived at the front door, she wrapped her hand around the door handle. Rich hunger for revenge burned in her veins and made her intent on one thing: to slaughter the werewolf who escaped the night of her parents’ murder. Not caring what awaited her, she stormed inside, dagger pointed, ready to kill.

The simple cabin had two large brown couches near a wood-burning stove, a kitchenette behind the living room, and a quilt-covered bed resting in the back. And that was it; there were no other rooms to investigate. No secret hiding places she could see.

She cursed, shut the front door behind her, then trotted down the steps to return to her hiding spot. On her way across the yard, she glanced at the space to the right of the tree, which looked much like a heat wave, indicating that the portal to the Otherworld remained.

In some places around the world—or the Earthworld, as supernaturals had called it—there were permanent portals to the supernatural realm. This portal had only appeared because Nexi had travelled to this cabin from the Otherworld. Once she passed through the portal again, the gateway would vanish.

Magic had its perks. Quick travel was one of them.

Nexi shook her head at how normal all this magical stuff seemed now. Just over a month ago she’d never believed in anything that went bump in the night. Now she knew all those things existed, and in fact, she was one of them.

To her horror, she had learned that her birth mother, Tillie, had been murdered by a power-hungry vampire, Lazarus. All those years ago, her birth father, Drake, had protectively decided to block Nexi’s supernatural abilities. He had planned for her to live and die as a mortal. Now with her return to the Otherworld and the removal of the block on her true identity, there was no going back.

She was no longer plain, human, Nexi Jones.

Looking away from the portal and to her hiding spot until the werewolf returned, she hurried her steps. She wasn’t ready to return to the Otherworld yet. Not until she had the werewolf’s head as her wall ornament would she dare go home.

Just as she neared the tree, a woodsy scent that had nothing to do with the forest mixed with the citrusy aroma of aftershave. A blink of an eye later, the dagger she held was now at her throat, a hard body closed in on her back.

“You smelled lovely when you arrived.” The low voice by her ear held a faint English accent. “But I never imagined you’d be so pretty.”

The blade pressed into her skin, not drawing blood, but implying that if the werewolf chose, she’d be destined for the grave. “I’m…”

“Going to explain yourself.” He lowered the dagger, took hold of her arm, and jerked her forward.

In a few short strides, the werewolf tossed her through the threshold of the cabin, and slammed the door behind them. He sauntered to the couch, sat down, and regarded her. “Now then, darlin’.” His olive skin was stunningly flawless, and his chocolate-colored hair was spiked tall. “Why would a pretty lass like yourself plan to attack me?”

“Don’t move.” That charm wouldn’t fool her. “Stay right where you are.”

“My mouth is the only thing moving.” His slanted amber eyes raked over her. “Would you like me to stop talking?”

“No.” She hesitated then added, “Only your mouth can move. Nothing else. Tell me what you know.”

He gave her a long look. “I’d be glad to tell you anything you’d like, love.”

His kind face and soft voice wouldn’t trick her. He was a werewolf. She was certain, which was another oddity.

After the block on her supernatural abilities had been lifted, she could identify a supernatural creature as if knowing the difference between a brunette and a redhead. “Tell me why you killed my family.”

“That’s an interesting accusation.” He cocked his head, studying her with a frown. “But I think the more important question is who are you?”

She lifted her chin. “The lass who’s going to cut off your furry wolf balls.”

5 Hoots: Couldn't get enough 4 Hoots: Page turner, really like it 3 Hoots: Just like it 2 Hoots: Not my style 1 Hoot: Didn't care for it