I am so happy to be participating in Dianne’s blog tour. Please enjoy the series spotlight and at the very end of the post there is a giveaway where you have a chance to win one of the first 3 books signed and some swag! Thank you for coming! 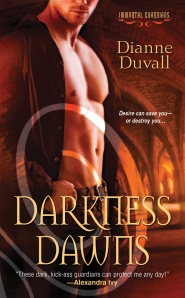 In this dazzling, sensual novel, Dianne Duvall beckons readers into a world of vampires, immortals, and humans with extraordinary gifts . . . where passion can last forever, if you’re willing to pay the price . . .

Once, Sarah Bingham’s biggest challenge was making her students pay attention in class. Now, after rescuing a wounded stranger, she’s landed in the middle of a battle between corrupt vampires and powerful immortals who also need blood to survive. Roland Warbrook is the most compelling man Sarah has ever laid hands on. But his desire for her is mingled with a hunger he can barely control . . . In his nine centuries of immortal existence, no woman has tempted Roland as much as Sarah. But asking her to love him is impossible — when it mean forfeiting the world she’s always known, and the life he would do anything to protect. 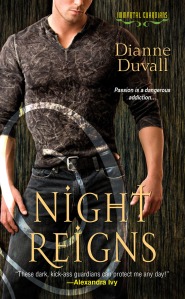 Dianne Duvall portrays a world of temptation, loyalty, and heartbreak . . . a world where danger and desire walk hand in hand . . .

Ami isn’t much for trusting strangers. She has a hard time trusting anyone. But she’s no coward, and she’s no pushover in the protection department either. So when she comes across a mysterious warrior taking on eight deranged vampires on his own, she doesn’t hesitate to save his bacon. Of course, that was before she realized what one little rescue would get her into . . . Marcus Grayden has been an immortal protector of humanity for eight hundred years, and at the moment he’s not interested in backup. From the moment Ami arrives in his life, he can’t deny that she’s strong, smart, and extremely skilled at watching his back. But she’s also destroying his protective solitude and stirring desires he can’t bear to awaken. After all, whatever her secrets — how can she defeat death itself? 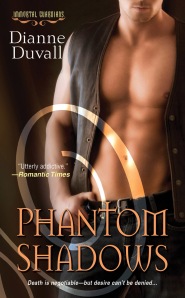 Dianne Duvall lures readers into a world of romance and suspense, where love can mean the difference between life and death . . .

Dr. Melanie Lipton is no stranger to the supernatural. She knows immortals better than they know themselves, right down to their stubborn little genes. So although a handsome

rogue immortal seems suspicious to her colleagues, Sebastien Newcombe intrigues Melanie. His history is checkered, his scars are impressive, and his ideas are daring. But it’s not his ideas that have Melanie fighting off surges of desire . . .

Bastien is used to being the bad guy. In fact, he can’t remember the last time he had an ally he could trust. But Melanie is different–and under her calm, professional exterior he senses a passion beyond anything in his centuries of experience. Giving in to temptation is out of the question–he can’t put her in danger. But she isn’t asking him . . .

Don’t miss Dianne’s big kindle contest! In addition to the giveaway here at Bookish Babbles With Michelle, she’s giving away THREE Kindles (or Kindle Gift Cards if you already have one) to celebrate the release of PHANTOM SHADOWS. See her website for details.

5 Hoots: Couldn't get enough 4 Hoots: Page turner, really like it 3 Hoots: Just like it 2 Hoots: Not my style 1 Hoot: Didn't care for it